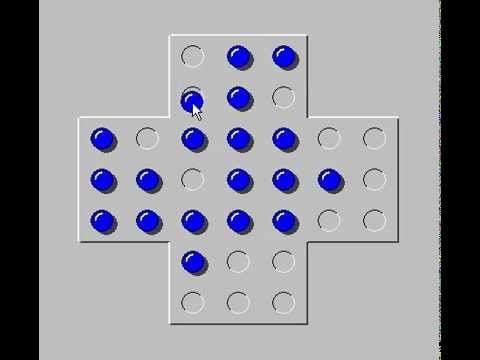 Solitaire games are really fun. But what makes them stand out from others games is their simplicity. You can play them by yourself all day and never get bored. They are all easy to learn, very entertaining, and fairly challenging. One of the most popular solitaire games is Peg Solitaire. It is a really unique solitaire game as it stands out from the rest of the versions in that it doesn’t use a pack of playing cards. It is simple but also very addictive and challenging. Often times, new players have difficulty getting into it. So today, I will discuss how to play Peg Solitaire, and how to get better at it.

The rules are very simple. You play on a special peg solitaire board. You can already guess that it is different from other games as it does not involve cards. The board consists of 33 holes and 32 pegs. You only have one goal. The goal is to end up with one single peg at the very center of the board. Now, you may wonder how that is possible? There are certain rules and valid moves to follow. You move a peg over another peg given there is an empty hole on the opposite side. You can only move over adjacent pegs in horizontal or vertical directions. So, movement along diagonals is not allowed. When you move a peg in this way, the jumped-upon peg will be removed from the board. In this way, you will keep making moves and with each turn, a peg will be removed from the board. You have to be very careful about moving certain pegs at certain times because only then can you win the game. For example, if you make a bad move in the middle, it is likely that you would never be able to finish with 1 single peg at the center because you would have ruined your position.

So how do you win?

I will talk about one of the strategies to win in Peg Solitaire for the English board. If you have a board with you, or if you are playing online, I recommend keeping it in front of you while you read this.

Your first aim must be to get rid of the 3 pegs in the bottom. In other words, the 3 pegs that are closest to you. First thing you should remember is to always work from right to left. For example, the 3 pegs that I talked about earlier, must also be removed from right to left. At the start, as there is a second layer of pegs above the bottom layer, you cannot remove it at move 1. So, you start by getting rid of the peg directly below the center. When you do that, an empty space will be created. This now allows the peg on the right side to move. Immediately after, you can move the right most peg to the hole you just created. Now another peg has been removed. This is the start of our strategy as now there are holes you can utilize to remove the bottom 3 pegs. Now, move the right-most bottom peg forward. You have successfully removed the first of the bottom pegs.

What follows after these initial steps is very important. At this point you have successfully removed 1 bottom peg that was on the right side. Now, if you remember, our rule was to work from right to left. The peg to the left of it is the one at the center bottom. If you move the left most peg over it, it will also be removed. Now you are only left with 1 of the pegs from the initial bottom 3. The next step is very easy and also ensures you remove this third peg. You jump a peg that is 2 holes above it, so it gets closer to the bottom peg. This allows you to jump the bottom peg over the one you just moved. At this stage, your bottom 3 pegs should have been removed. You should be left with a board position like this:

If you have reached this position then congratulations. If not, carefully read through the above instructions again.

If you follow these steps correctly you should arrive at a very symmetrical position with only a few pegs left. You can easily beat the game from that point onwards yourself – I don’t want to take away the whole challenge! This is one of the widely used strategies to beat Peg Solitaire.

Peg Solitaire is a simple yet a challenging game. Like most other solitaire games, it is quite addictive. You can set different rules for yourself for a new challenge once you have mastered the basic game. For example, you can change where the starting hole is placed, or you can also change where the last peg should arrive. In some online games you can also vary the size (number of holes) and even the shape of the board to offer different levels of difficulty. Whatever mode you play, winning the game feels super satisfying! If you have not tried the game yet, then peg solitaire along with a number of the traditional card based solitaire games can be played for free at https://www.coolmathgames.com/0-solitaire.