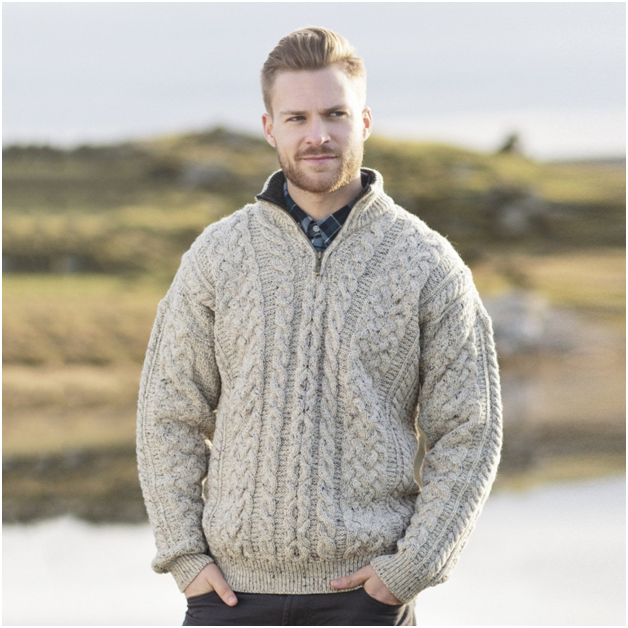 When you think about Irish symbols, the ones that immediately spring to mind are probably the shamrock, Guinness, and leprechauns. One symbol that doesn’t immediately spring to mind but is just as defining for Irish culture is the wonderful Aran sweater. Although it is deeply rooted in Irish culture and has an authentic feel to it that appeals to many Irish people, this is a garment that has secured for itself the status of a fashion icon outside of Ireland as well. This is not only because of its rich history but also because of its unique qualities. If you want to get a durable and full history garment, the beautiful Irish wool knit sweaters are the ones you need.

How Irish Aran sweaters were created and popularized

Aran sweaters come from the remote rocky Aran Islands and their creation is closely tied to the geography and history of the islands. The Aran Islands have long been known for being devout preservers of Irish culture, including its roots in Celtic tradition. Although the fact that Aran knit patterns feature Celtic-inspired symbols is disputed, it is reasonable to believe that the stitchings were at least to some extent inspired by a tradition that the islanders were trying to preserve for centuries. This is especially relevant because the 19th and 20th centuries, when the Aran knit first appeared, were the centuries of Celtic revival. The Aran stitchings first appeared in the 1890s when the Congested Districts Board intervened to help the region’s fishing industry. In the 1940s, the first Aran sweater knitting patterns were published by Patrons of England, then, in the 1950s, the Aran sweater appeared in Vogue. In the 1960s and 1970s, the sweater was further pushed to mainstream popularity thanks to celebrities such as The Clancy Brothers, Marilyn Monroe, John Lennon and many others. Today, the sweater is considered one of the garments that influenced fashion in the last 100 years.

Each Aran stitch has a unique meaning that is rooted in the way of life of the Aran Islanders. The most famous is the cable pattern, which symbolizes the fishermen’s ropes and their hope for a good catch. The diamond stitch is representative of the fields of the Aran Islands and the hope for a good harvest. The zig-zag pattern represents the cliff paths of the island. The honeycomb stands for the working ethic of the islanders. These and others reflect the geography of the islands, as well as the soul of the people living there. But there is another interesting fact about the significance of Aran sweaters. There is a myth that the Aran sweater was once known as the “bridal shirt”. When a young fisherman started courting a girl, he knew that his feelings were reciprocated if his darling knitted him an Aran sweater. She would knit a sweater using all the traditional stitches and would give it to him to show that she accepts to be his wife. The craftsmanship behind the sweater showed him that she is practical and thus would make a good wife and mother.